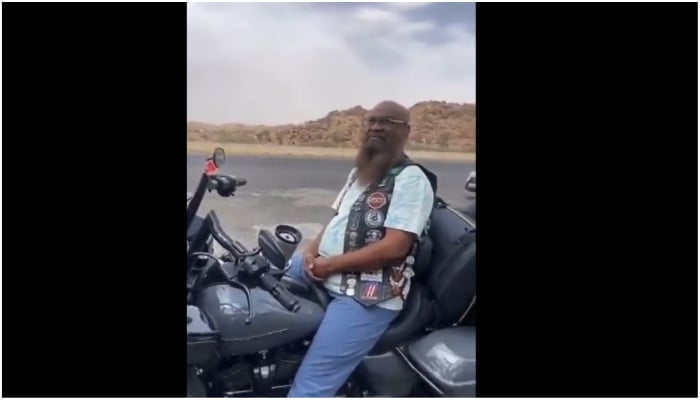 A Snapchat video of the former imam of Saudi Arabia’s Grand Mosque Sheikh Adel al-Kalbani has recently gone viral on social media in which he could be seen sporting his chest-length beard while riding a Harley Davidson in Western clothes.

The video showed the former imam wearing a vest decorated with badges, including an American flag, according to Al-Arabiya News.

The Imam happily presented a peace sign when a fan — who was filming the video — asked him to.

Muslim Twitter users were pleasantly surprised to see a former Imam having fun outside of the mosque.

“The Sheikh, in my opinion, did not do anything forbidden and he is free to do what he wants, but we are accustomed to seeing Imams, especially Imams of the sanctuary, dressed in a specific way, and we do not accept seeing them in any other way, and this is wrong. Leave the creating to the Creator and deal with your own and your families’ issues,” a Twitter user said.

Other users criticised his Western attire, with one user commenting the Imam was “far from decency and civility”.