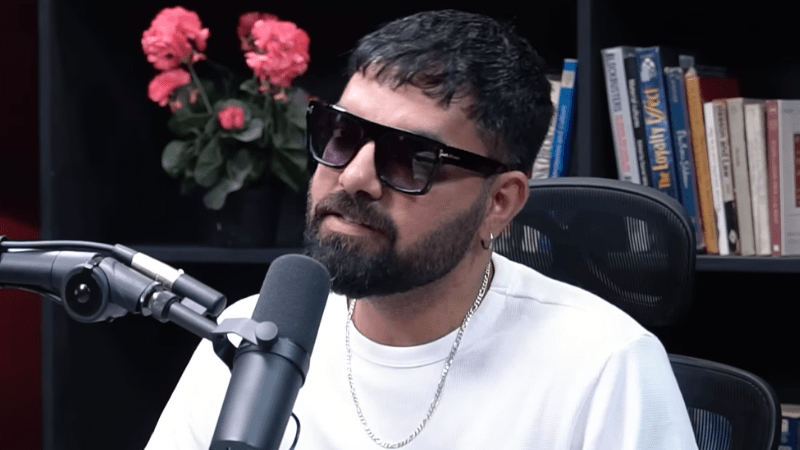 Yasir Hussain and Ayesha Omar’s film Javed Iqbal: The Untold Story Of A Serial Killer, despite having a Karachi premiere, was stopped from screening by the censor boards. Having been on the receiving end of an unreleased project after all the hard work, Hussain has a lot to say about the hypocrisy in censorship approvals and the kind of content running “successfully” in the industry.

On Saturday, the 38-year-old actor made a guest appearance on Junaid Akram’s podcast where he had a candid conversation on what works and what bothers him about the showbiz world. Currently starring in the period drama Badshah Begum, Hussain expanded on how he’s baffled by the “strange” ratings revealed for certain shows, implying that deserving storylines and projects go unnoticed.

“We made Badshah Begum, we went to shoot in big havelis (palaces). They showed a different environment with fields, canals and waterfalls but it doesn’t get the same ratings as dramas that show a woman being abused…which is strange. There are dramas such as Ranjha Ranjha Kardi, Ullu Baraye Farokht Nahi, and other dramas by Kashif Nisar, all have different storylines and are great but they don’t get enough ratings.”

Upon being asked about his future work, Hussain’s inner theatre enthusiast shone through. He revealed that his next project is about four boys and girls who want to work in theatre but bump into a kingpin of sorts who traps the four theatre aficionados. This show, he said, will be different from the same “posh” neighbourhood the host claimed is shown in all other TV dramas these days.

The discussion then moved on to the portrayal of women in TV dramas these days with a chaddar-covered girl  being pitted as “the right woman” against the “characterless” ones who wear sleeveless or western clothes. Refusing to comment on actors who choose to do such roles, Hussain said that if we can’t move on beyond such cliches then the entertainment industry needs to shut down.

“I feel strongly about our country closing down everything all at once. We should become a proper Islamic state and finish the film industry, drama, radio, theatre and dance. And if someone wants to [continue doing these things], they should just move out,” he said.

“And if we cannot do that, then we should just move a step ahead, which by no means implies that we should remove our clothes — we should promote art with the respect it’s given throughout the world.”

Giving examples from his own work, Hussain shared how his projects do not show women as a “weak character” or those that change their  fashion choices to find approval from society. “Whenever I’ve written a drama, no woman has been portrayed as helpless. I wrote Karachi Se Lahore where Ayesha Omar’s character has three men come begging for her jeep to go for a trip only for her to set a condition that she and her brother will come along. She would wear kameez shalwar as well as jeans. I didn’t stereotype her [and make her full of] innocence and wear just a kameez shalwar and show that pants and shirts would make her a bad woman.”

He also gave a shout out to other projects that had strong female characters saying he still doesn’t get why women need to be shown as the weaker character on screen. “Saba Qamar in Lahore Se Aagey was never a weak character and Kubra Khan’s character from Shadi Mubarak Ho was a strong-headed woman,” he exclaimed.

Hussain then went on to raise a glass to Iran and its flourishing film industry which recently bagged an Oscar, touting that a major problem with our country’s media industry is that it doesn’t take a topic for what it is and censors it according to ‘national values’.

Hussain said when Javed Iqbal’s poster was shared, it excited everyone because of what the film was based on. The film later got an international nod for being screened at a UK Film Festival. He said the same happened with the Cannes winner Joyland.

“Is this a joke? These people are giving standing ovations to your work. Now show me how this film will be released in Pakistan? It won’t. Why? Because the film is about a married man falling in love with a transgender [person]. It’s a story, it doesn’t mean you’re promoting it. For how long will your stories remain rom-coms?” he demanded.

Tired of the same Bollywood tropes, he lamented, “[How long will] a hero do comedy, impress the heroine, they’ll sing songs, they’ll fight, there will be a speech at a wedding and the hero will come out in a typical Ranbir Kapoor shot? How long will that go on for?”

Reiterating that Javed Iqbal is our very own story as the actual incident took place in Lahore, the Jhooti actor said that the authorities cannot accept and are ashamed of such local stories.  “As long as there’s no acceptance, a certain type of movies or content can’t be made. Censorship needs to be fixed. Across the world, being ‘censored’ means that this thing of yours can’t be watched by a certain age group and then it is granted a licence. It doesn’t mean that after adding beep beep beep, you cancel the premiere.”

Given how Twitter trends often have an impact on censorship decisions, the actor argued that positive things trending on Twitter and Netflix also need to be taken into account when it comes to censorship.

Concluding the conversation, Hussain went on to clarify his once negatively interpreted comments about Turkish dramas airing in Pakistan. Saying that he has “no issues” with Dirilis: Ertugrul and its lead actor, he added,  “[It’s just like] people are talking about Doctor Strange, which is just a film. But our nation is ahead when it comes to TV dramas and then there comes a show like Ertugrul and now we’re playing that on national TV. In exchange if they play one of our dramas on national TV then only is it a fair deal, just like how they are currently doing a joint production,” referring to Selahuddin Eyyubi in making.

Hussain believes it’s unfair that quality content gets produced here and actors work day and night for certain projects only for an international show to take the limelight unless a mutual deal that benefits both industries takes place.