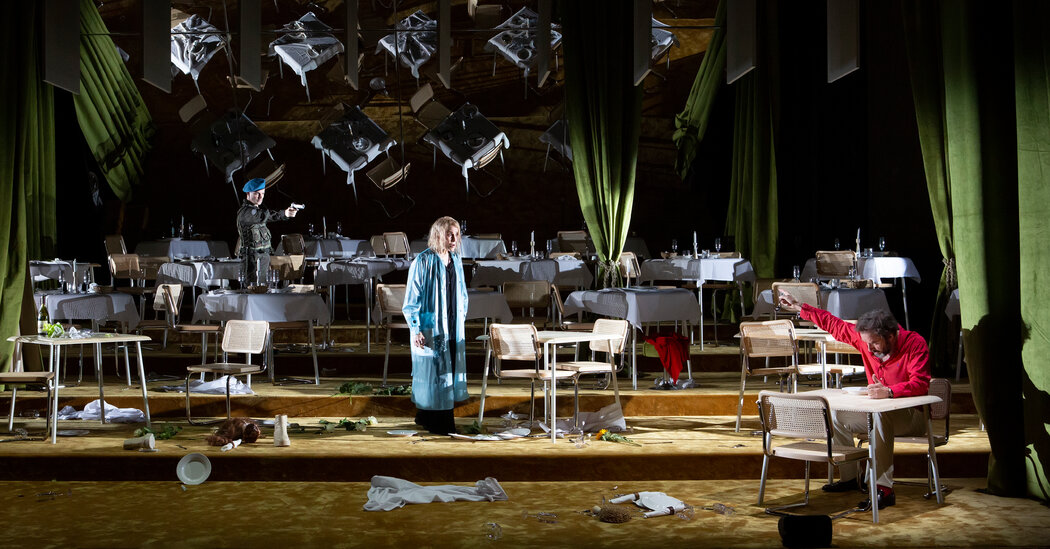 SALZBURG, Austria — The 1920 premiere of Arthur Schnitzler’s “Reigen” provoked a riot in a Berlin theater. A year later, in Vienna, the work was shut down by the police. Shortly afterward, the playwright, who was prosecuted for indecency, banned further performances in Germany and Austria. The play, a merry-go-round of love affairs with a cast of characters drawn from all echelons of society, was not performed again in German until 1982, over half a century after Schnitzler’s death. Instead, its fame spread in translation, including French film adaptations by Max Ophüls and Roger Vadim.

Last week, a new play inspired by Schnitzler’s succès de scandale premiered at the Salzburg Festival, where it was one of two reworked classics during the event’s opening days. The Salzburg Festival is, of course, better known for its musical offerings, including the high-profile opera premieres it rolls out each summer, but drama is Salzburg’s oldest tradition, dating back to the production of Hugo von Hofmannsthal’s “Jedermann” that opened the first festival, in 1920. Nowadays, the plays at the festival draw a more diverse crowd than the exorbitantly priced operas, but Salzburg remains a blue-chip event, and the audience is swankier (and generally older) than your typical theatergoers in Berlin or Hamburg.

For her Salzburg debut, the Latvian American director Yana Ross asked European writers under 50 to devise new scenes using “Reigen,” a cycle of 10 pre- and postcoital dialogues, as a rough guide. The result is a 21st-century homage that bears little resemblance to the original. As an anthology of short dramatic texts by a diverse group of established and emerging writers, it is both varied and, perhaps inevitably, uneven.

Ross strings them together in a handsome production set in an upscale restaurant. Throughout the evening, the constantly reshuffling couples meet to share the quiet intimacy of a meal, with the tables and their occupants reflected in a large tilted mirror. The seven main actors dance their way from scene to scene to the strains of Maurice Ravel’s “La Valse,” or electronic and pop music.

In between, however, the production is on more solid footing, starting with the Finnish author Sofi Oksanen’s thoroughly contemporary reworking of the play’s second dialogue, between a soldier and a chambermaid.

In Oksanen’s version, a man flirts over the intercom with his food delivery courier and then panics when she accepts his invitation to come up and share his dinner. Face to face with her, he is painfully awkward. Eventually, she discovers that her customer is a far-right internet troll, a revelation that sours any attraction she might have felt. Tabita Johannes lends the courier a shy curiosity before lashing out at the creep who’s lured her into his living room. It is one of several dazzling turns by Johannes, who like much of the cast belongs to the acting ensemble of the Schauspielhaus Zurich, where the production will transfer in September. (The majority of “Reigen’s” authors are women, and the female characters are generally better written and more interesting than the men.)

Johannes also appears as a woman who accuses her boss of forcing himself on her, in a #MeToo-era twist on Schnitzler’s dialogue between a young man and a chambermaid. In the scene, by the French Moroccan author Leïla Slimani, the woman takes her employer to court, where she recounts his serial abuse in painful detail. Elsewhere Johannes gets to show her seductive, manipulative side as the clandestine lover of an older female author, in a scene by the Berlin writer Hengameh Yaghoobifarah that is the only one approaching the sexiness of the original play.

Several other episodes are awkward fits, including one by the Hungarian author Kata Weber, about an actress nearing 40 who is terrified that her career will evaporate in her middle age. Lena Schwarz’s flamboyant, scenery-chewing performance notwithstanding, the episode comes across as clichéd and seems off topic.

The production’s biggest gamble is a Skype conversation between a mother and son, written by the Russian author Mikhail Durnenkov. (The split-screen video is projected onstage.)

Durnenkov, who now lives in Finland, rewrote the segment after Russia’s invasion of Ukraine in February. The opening dispute, about a family friend arrested for kissing a man at a protest, works better than the son’s subsequent revelation that he is going into exile. “As long as we live here, they’re making war in our names. I won’t give them that right,” he says, struggling to convince his conservative mother. I can understand Durnenkov’s desire to make an antiwar statement, but his ideas are poorly dramatized and it is unclear how his scene relates to the others.

Several years after the “Reigen” premiere, Berlin kicked up another legendary Weimar Republic theater scandal with a 1929 production of Marieluise Fleisser’s “Pioneers in Ingolstadt.” Set in Fleisser’s Bavarian hometown, the play follows the fortunes of a young woman, Berta, who falls in love with Korl, a callous soldier stationed in town to repair a broken bridge. Audiences were shocked by the play’s depiction of small-town sexism and military cruelty, embellished for the premiere by Bertolt Brecht, who co-directed the production and staged the scene where Berta loses her virginity to Korl in an onstage shed that shook during their lovemaking.

In Ivo van Hove’s new Salzburg Festival production, that scene is far more explicit than anything Brecht could have gotten away with. The Belgian director stages it unambiguously as a rape scene, with Korl pinning Berta down as she screams and flails in the shallow water that covers most of the large stage. It is one of many violent acts — stoning, torture, drowning, you name it — enacted with much squirming and splashing during the unrelentingly grim production.

Van Hove, making his festival debut with this coproduction with Vienna’s Burgtheater, where it will transfer in September, fused “Pioneers in Ingolstadt” with an earlier play by Fleisser, “Purgatory in Ingolstadt,” about a pregnant schoolgirl and a former classmate with a savior complex. A new script, by Koen Tachelet, weaves the two plays together in a seamless, but not entirely convincing, way. The actors bring Fleisser’s hard, cold dialogue to life in emotionally raw performances, but they are miserable company to spend two and a half hours with. All that water onstage can’t wash away the humiliation and suffering. Nor did all the staging’s violence and cruelty produce a tremor of outrage. In lieu of a riot, the festival audience responded with polite, generous applause.