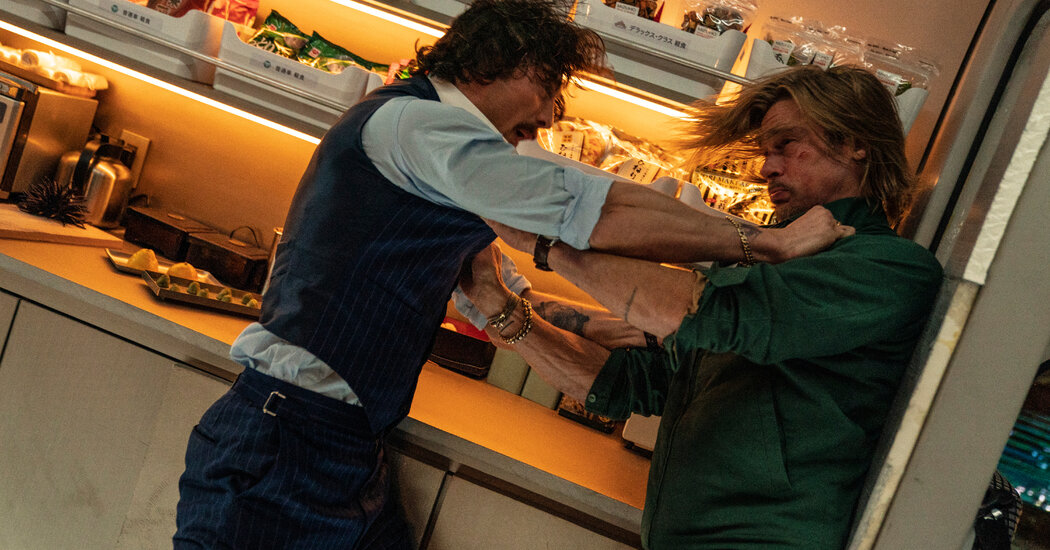 The giddily violent bummer “Bullet Train” takes place in Japan on a high-speed train that turns into a theater of death. It’s watchable — it stars Brad Pitt — jokey, sometimes funny and predictably stupid. Hollywood has long churned out dumb, brutal stories, one difference being that today filmmakers no longer need to rationalize carnage with moralizing or blather about heroic codes. The special effects are better now, too, of course — the splatter looks real good.

The story is incidental; the vibe, Looney Tunes Tarantino-esque. Mostly it turns on villains fighting and killing and fighting some more as a loosey-goosey Pitt moves from car to car punching, joking, mugging, scheming and sprinting. His character, an assassin having a crisis of faith, has the cutesy handle Ladybug and is an underworld hireling who takes orders from a smooth talker (Sandra Bullock) who largely remains offscreen. For his new mission he has to steal a briefcase, a job he takes on with anxiety issues, serious skills and a white hat that he soon ditches, letting loose a perfect golden-boy bedhead and much violence.

Freely adapted from “Maria Beetle,” a page turner by the Japanese author Kotaro Isaka, the movie was directed by David Leitch and written by Zak Olkewicz. As might be expected from a big-ticket studio item, there have been changes in the transition to the screen, including the commercially strategic makeup of the main characters. Most are now Westerners, including Benito Antonio Martínez Ocasio, a.k.a. Bad Bunny, who pops up as a cartel caricature, and Brian Tyree Henry and Aaron Taylor-Johnson, who stick around longer as tag-teaming British assassins. Also onboard are Joey King, Hiroyuki Sanada, Andrew Koji, Zazie Beetz, Michael Shannon and an underused Karen Fukuhara.

The likable cast is among the movie’s attractions, as is its stunt choreography. Leitch is a former stunt man (he’s worked as a stunt double for Pitt) and his background shows throughout “Bullet Train,” which takes place largely inside the narrow confines of the train as it races from Tokyo to Kyoto. Leitch does some nice work within these severely circumscribed spaces and one of the wittiest fights finds Ladybug and Henry’s character grappling in face-to-face seats across a table, their bodies eventually intertwined as they wrestle and writhe. (They’re shushed by a sexist old-biddy cliché who looks like Garth from “Wayne’s World.”)

If Leitch doesn’t always work within the train’s tight quarters — each car a separate film set — as imaginatively as he should it’s partly because he’s too busy juggling the story’s many busy churning parts, including a glut of flashbacks. Again and again, the movie cuts away from the main action to fill in one of the characters’ backgrounds, which are never as engaging as Pitt et al. running daffily amok. These flashbacks add negligible texture and even less interest. Worse, because he repeatedly blasts back to the past, Leitch never manages to build sustained narrative momentum inside the train, which badly flattens the movie overall.

“Bullet Train” doesn’t have any ideas, beyond the geometric problems presented by all its bodies jostling within small spaces, which means that there’s not much to think about other than how good Pitt looks and how the violence lands. Certainly, much of the creative energy here has gone into finding different ways for dudes to die — and this is an almost all-male death-a-thon — or to kill one another. Some die by the sword, some are poisoned (cue the bleeding eyes), while others rocket off this mortal coil via explosions or blows that send them spiraling. One man’s throat is slit with a knife while another is shot in the neck. That poor soul vainly tries to stanch the bloody geyser that spurts like water from a fountain.

You’re not meant to care. Most of the characters are disposable, interchangeable minions who scurry around before they’re inevitably exterminated by someone else with bigger guns and brains. As you’d expect from the title, many of these underlings are shot to death with handguns and long guns of assorted sizes. Characters are riddled, shredded, annihilated; one guy loses half his face — bang-bang, ha-ha.

“Bullet Train” has its moments, a few laughs, some smooth moves, but Leitch has done better elsewhere, including in the original “John Wick,” which he directed (uncredited) with Chad Stahelski. A tale of vengeance, “John Wick” has an equally high body count, but it’s better structured, more modulated, and has a brittle veneer of high-mindedness. The hero of “John Wick” is on a mission; Ladybug is on a job. In other words, “John Wick,” in classic American (cinematic) fashion, presents a moral justification for its slaughter. “Bullet Train” doesn’t even bother serving up such self-elevating, audience-flattering fantasies — its blood lust is honest.