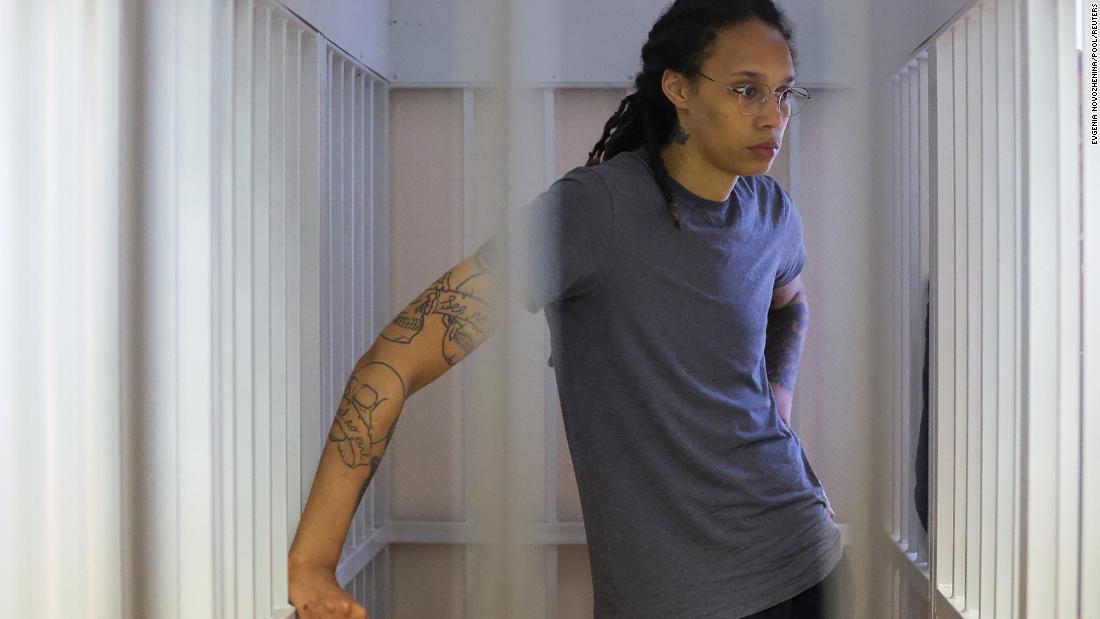 Now, Griner has returned to the detention center where she was held during her weeks-long trial as her lawyers vow to appeal the sentence and the Biden administration attempts to negotiate for her release.

During the trial, Griner pleaded guilty to carrying less than 1 gram of cannabis oil in her luggage as she traveled through a Moscow airport on February 17. She testified in court that she was aware of Russia’s strict drug laws and had no intention of bringing cannabis into the country, saying she was in a rush and “stress packing.”

Her lawyers had hoped that Griner’s guilty plea and statements of remorse would result in a more lenient sentence. She faced 10 years for the charges and prosecutors requested she be sentenced to 9.5 years in jail. In addition to her nine-year sentence, Griner must pay a fine of 1 million rubles, which is roughly $16,400.

“I made an honest mistake and I hope that in your ruling that it doesn’t end my life here,” Griner said in court prior to the verdict. “I know everybody keeps talking about political pawn and politics, but I hope that that is far from this courtroom.”

The US State Department has classified Griner as wrongfully detained. The Biden administration has offered to trade a convicted Russian arms dealer in exchange for Griner and another American detainee, Paul Whelan, CNN has previously reported. Russia’s foreign minister reportedly indicated to journalists Friday that Moscow was ready to discuss the topic.
After the verdict, Griner’s agent, Lindsay Kagawa Colas, tweeted, “Today’s sentencing of Brittney Griner was severe by Russian legal standards and goes to prove what we have known all along, that Brittney is being used as a political pawn.”
In a statement, President Joe Biden said the sentence was “unacceptable” and demanded that she be returned to the US to be reunited with her family.

Here’s what comes next for Griner as she awaits her lawyers’ appeal and the US continues to negotiate for her release.

Griner’s legal team will file an appeal to the court’s decision, which they must do within 10 days of the verdict, according to her lawyers, Alexander Boykov and Maria Blagovolina, who is a partner at Rybalkin, Gortsunyan, Dyakin and Partners law firm.

“We are very disappointed by the verdict. As legal professionals, we believe that the court should be fair to everyone regardless of nationality. The court completely ignored all the evidence of the defense, and most importantly, the guilty plea,” they said in a statement.

They called the verdict “absolutely unreasonable” and insisted in the statement that the decision “contradicts the existing legal practice” in Russia.

Blagovolina told reporters that the average time in jail for this type of crime is five years, adding that almost a third of those convicted get parole.

During the trial, the lawyers argued that Griner’s detention was handled improperly. Griner testified that she was made to sign documents that she did not fully understand and was not given adequate translations of the Russian-language paperwork.

A defense expert also testified that the examination of the vape cartridges containing the cannabis oil did not comply with Russian law.

US has proposed prisoner swap for Griner’s return

Last week, CNN reported that the Biden administration has proposed a prisoner swap, offering to exchange a convicted Russian arms trafficker for Griner and Whelan. Whelan, a US citizen and former Marine, was handed a 16-year prison sentence in 2018 on espionage charges after a trial the US deemed unfair.

After Griner’s sentence, National Security Council coordinator John Kirby said that it was “up to the Russian side” on whether the conviction will open the door for prisoner-swap negotiations.

After the US proposed a prisoner swap, Russia countered by requesting that convicted murderer Vadim Krasikov also be released, multiple sources familiar with the discussions have told CNN. The US has not considered the counter as a legitimate proposal, in part because the request was made through an informal backchannel.

Kirby reiterated Thursday that the US’s position remains that it wants Russia to “take the deal on the table because it’s a good one, it’s a fair one, and it’ll help bring Paul (Whelan) and Brittney home.”

Russian Foreign Minister Sergey Lavrov told journalists at a news conference Friday that officials “are ready to discuss” the prisoners being held by both countries, according to Russian state news agency RIA Novosti.

“There is a specified channel that has been agreed upon by the presidents, and no matter what anyone says publicly, this channel will remain in effect,” Lavrov said, according to RIA Novosti.

While US officials have long opposed prisoner trades, the successful release of Trevor Reed, an American and former Marine who was imprisoned in Russia, garnered bipartisan praise from lawmakers and was considered a political win for the Biden administration.

Family and supporters continue to fight for her return

The swap proposal follows months of pressure from Griner’s family and members of the basketball community.

The star’s wife, Cherelle Griner, has been outspoken about her desire for US officials to take more substantial action to bring her wife home. Days after Cherelle Griner expressed frustrations in an interview with CNN, Biden and Vice President Kamala Harris held a call with her to reassure her they were committed to securing her wife’s release, according to a White House call readout.

Griner has also had the steady support of her WNBA team, the Phoenix Mercury, as well as other members of the basketball community.

Before the start of a game Thursday night between the Mercury and Connecticut Sun, members of both teams linked arms in the center of the court and held a 42-second moment of silence for Griner, who wears 42 on her jersey. After it ended, people in the crowd started chanting, “Bring her home! Bring her home!”